Traditionally, the kora was tuned to suit the pitch of a singer’s voice, or to accompany a bala (balafon) with fixed tuning. Furthermore, the music of the jalis traditionally used a heptatonic scale, whose notes did not exactly correspond with the equal tempered Western scale. In the absence of written music, each musician was free to tune the kora how they pleased (and of course, that is still true today.)

However, there are a number of traditional tunings, with the strings tuned relative to the base tone (lowest string), albeit with subtle differences between each player. Particular pieces are associated with specific tunings. Some players recognise 4 such traditional tunings, others maintain there are only 3 or 2. Their names are Silaba (or Tomoro ba), Tomoro Mesengo, Hardino and Sauta.

A traditional kora, using the konso tuning ring system, can be quite tricky to tune and it takes some time and practice to learn how to do so.

Here, we will assume the player is using a kora with machine heads, which are easier and quicker to tune. We will also assume that the kora is being tuned to a Western scale (which will sound ‘right’ to Western ears and allow the kora to be played with guitar and other instruments with a fixed scale.) A base pitch of F is the most common and is shown here. It is certainly possible to tune the instrument to other pitches (within the limits of acceptable string tension.) This tuning of the instrument to a F major Western scale is a recent development, but does make it much easier to play with others.

The tuning diagram shows the kora bridge from above, so that when the instrument is held by the musician, the two closest strings are tuned to F. Note that the numbers shown are simply the number of octaves higher than the lowest note.

The F0 note is the first string on the left and is a semitone higher than the lowest (E) note on a guitar. 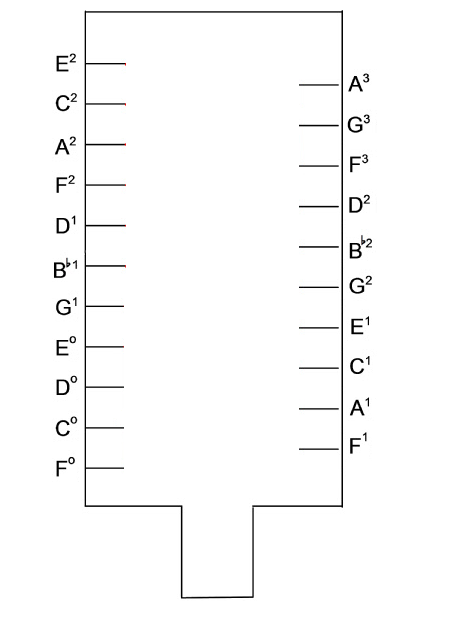 This tuning is known as ‘Silaba’.

Some pieces use a different tuning, often called Sauta, in which the 4th note of the scale is raised by a semi-tone. On an instrument tuned to an F scale, this means that the two B-flat strings are tuned to B. 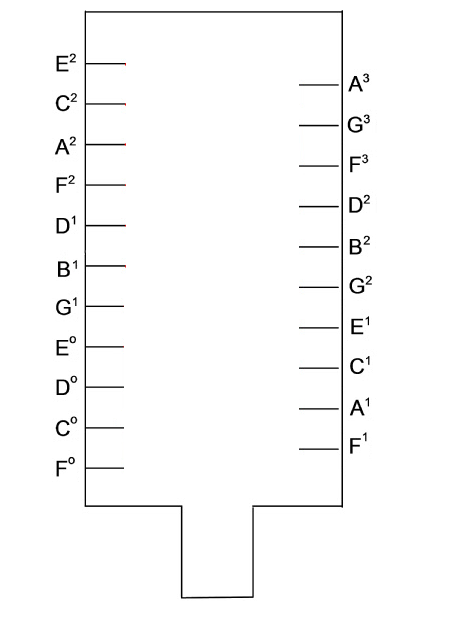 An electronic tuner - an inexpensive battery-powered device which clips onto a musical instrument can be a useful investment. You can clip it to the hole in the kora gourd. You can quickly check the tuning of your kora by playing each string in turn and looking at the tuner to see whether it is correct or needs to be adjusted upward or downward. Make sure that you buy a chromatic tuner, which has all notes and not just the six strings of a guitar. Of course, this is only a time-saver if you are using standard Western tuning.