Musically, the key features of music of Kora music are that it is modal, and has complex polyphony and polyrhythms. Let’s explore what those terms mean in a little more detail.

Modality is a term from Western classical music and while it can be argued that it does not strictly apply to Kora music whose notes do not completely correspond to the Western scale (at least traditionally), it can be a useful way to think musically. In simple terms, a mode is simply a type of scale. Different modes are thought to give a particular colour or feel to a piece of music, so that (as a simple example) the Ionian and Lydian modes sound “happy” while the Aeolian mode sounds “sad.”

Kora music uses a diatonic rather than chromatic scale. If we think about a piano, each octave is divided into 12 notes, each a semitone (half step) apart. The Kora uses a number of different heptatonic tunings, with 7 notes in each octave.

A typical polyrhythmic pattern found in much Kora music is a sequence with 3 beats played at the same time as one with 2 or 4 beats. This allows the listener (or musician) to feel a piece of music in two different meters together or to switch between two ways of hearing the same tune. Subtle variation of the spacing between beats by the musician can shift the listener in one direction or the other.

Traditional Kora pieces comprise a main theme, known as a kumbengo or kumben which can be thought of as a basic pattern to the song. It typically comprises a cycle repeated again and again, but with some variation over the duration of the tune. Later in the book, we’ll look at a number of these. Generally the thumbs play what might be thought of as a “bass line”, while the fingers play a treble melody at the same time, an example of the built-in polyphony of the kora.

The Kumbengo has a certain number of “pulses” - perhaps as few as 6 or as many as 24 which may have double or triple groupings or both, to form a cross-rhythm. The Kumbengo is often divided into two parts, often equal in length, but not always so. Although the Kumbengo is repeated throughout a piece, the skilled musician will introduce a set of subtle variations and much of the interest in the music may come from this, although it may be overlooked by the casual Western listener. This repetition and variation is a very characteristic feature of traditional Kora playing. As the Kumbengo is cyclic in nature, there is no fixed starting point of the cycle. This can take Western musicians by surprise. In writing the Kumbengo using Western musical notation, we simply choose an arbitrary point within the cycle to put first. The Kumbengo is typically a few seconds in length, although the speed at which it is played may vary greatly.

Many pieces have one Kumbengo which is played in much the same way by all players, but others may show significant variation with geographical location, family or even individual musicians playing them differently, although usually they will still remain recognizably the same piece.

These Kumbengo patterns are augmented by “Birimitingo” - fast, highly ornamented fragments of melody. They can be thought of as being similar to a ‘solo.’ During a performance, the player may freely switch between the two. The rhythm and pattern of the Kumbengo is always preserved and the player must smoothly transition out of the Kumbengo into Birimitingo and back again, often at specific points in the Kumbengo.

A really great example of this is the following short video by Toumani Diabate. He spends a few seconds playing the bass part of the song “Jarabi” (which means love, or passion), then plays the full Kumbengo and then begins to improvise while continuing to play the Kumbengo. 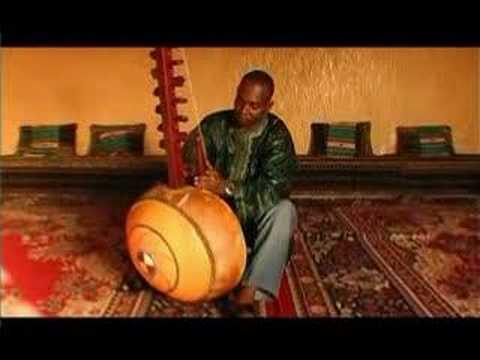