Bani Le (or just Bani) is a very good piece for beginners on the kora to tackle. It is a song which talks about the 19th century war between the Muslim Fula kingdom and the non-Muslim Kabu kingdom. It is in praise of the defeated king of Kabu, Janke Wali. The story is that the the king of Kabu (or Gabou) sent messengers to a Muslim village to buy horses. They were asked to say prayers in the Muslim way, but refused and all but one were killed, the man spared being sent back to his king to tell what had happened. The word “Bani” means refusal. In Mali, this song has been also used to praise Sanunge Guimba Keita who resisted French colonial troops. In Casamance, a variant of Bani called Sanu or Sanou (which means gold) is a very popular praise song.

Rather than trying to learn the song by learning a complex accompaniament piece by piece, or learning the two hands separately and then trying to bring them together, what we will do here is to start with the “skeleton” of the kumbengo (the repeated accompaniament.) This simple and a stripped down form can be learnt very quickly. However, we can then add modifications and extra notes and build up to something more complex. We’ll see how the kora player can vary the kumbengo between repetitions.

On this page, the music is shown in three different forms - staff notation (written one octave higher than played, to avoid lots of ledger lines), a kora bridge diagram and tablature. You can choose which one you use and open the image in a new tab, or even print it out if it helps.

There’s also a (synthesised) mp3 of each variant - apologies for the poor quality of these, but they simply illustrate the basic tune. 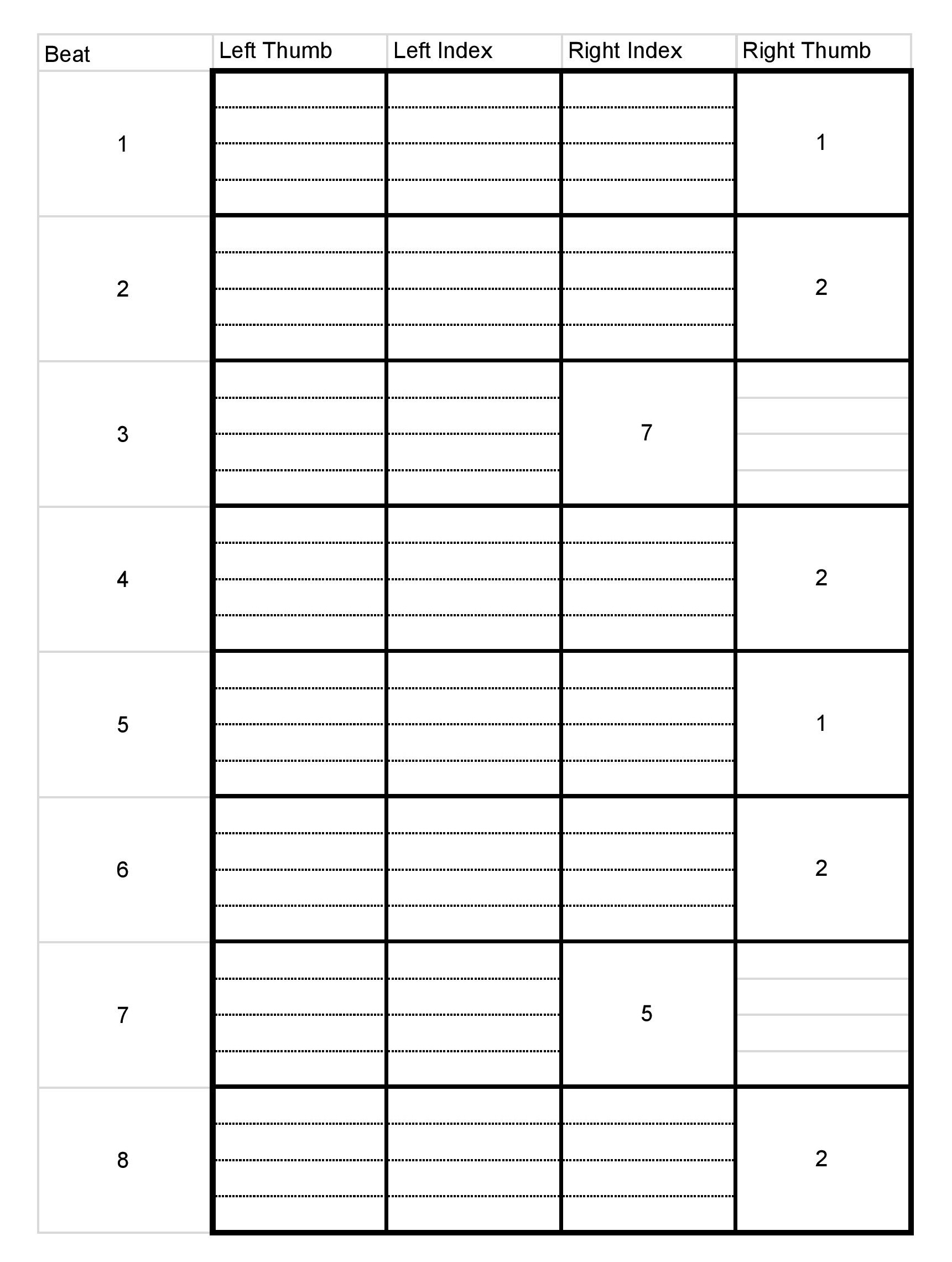 Take some time to get that sequence absolutely solid and repeatable and sounding musical. For each of the variants which follow, do the same. Make sure that you can repeat many times without error. Don’t be afraid to start off at a slow pace and gradually increase as your muscle memory builds.

First of all, we can try doubling the D note (the seventh string.) By doubling I simply mean playing the note twice quickly in succession in the same time that we previously played it once. We can do the same with the G note (fifth string), or both. That gives us 4 possible variations of the same kumbengo. Play about with that, trying to keep in time and to switch back and forth between the different variations. 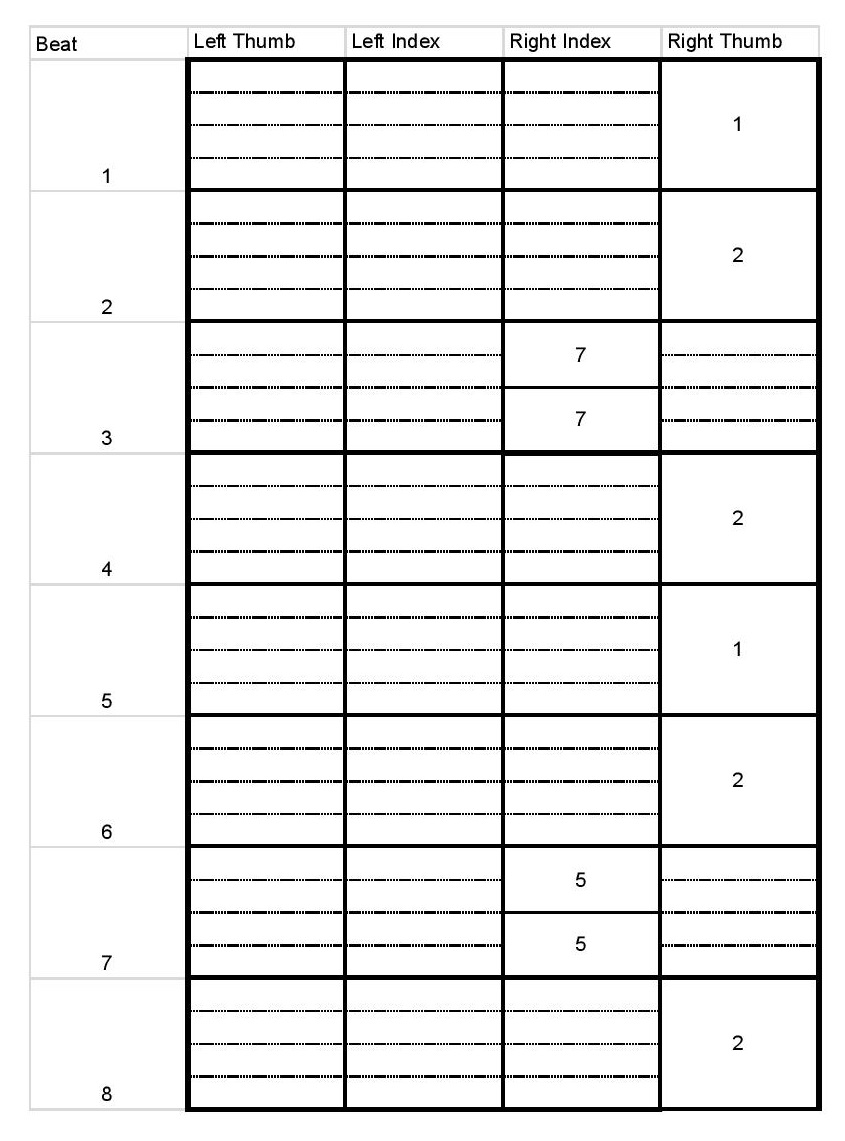 3 Now, we can also try playing the D and G notes using other strings. 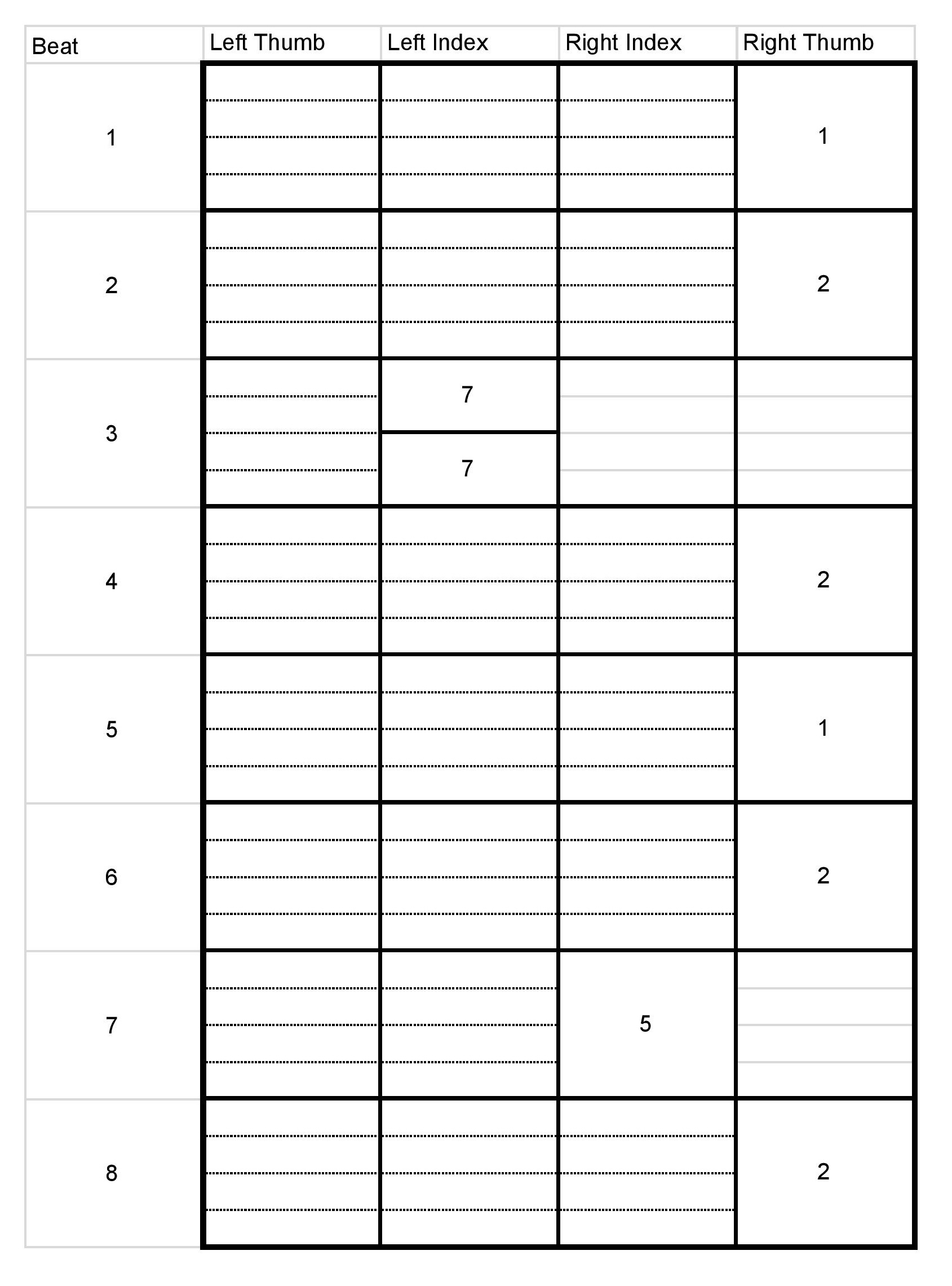 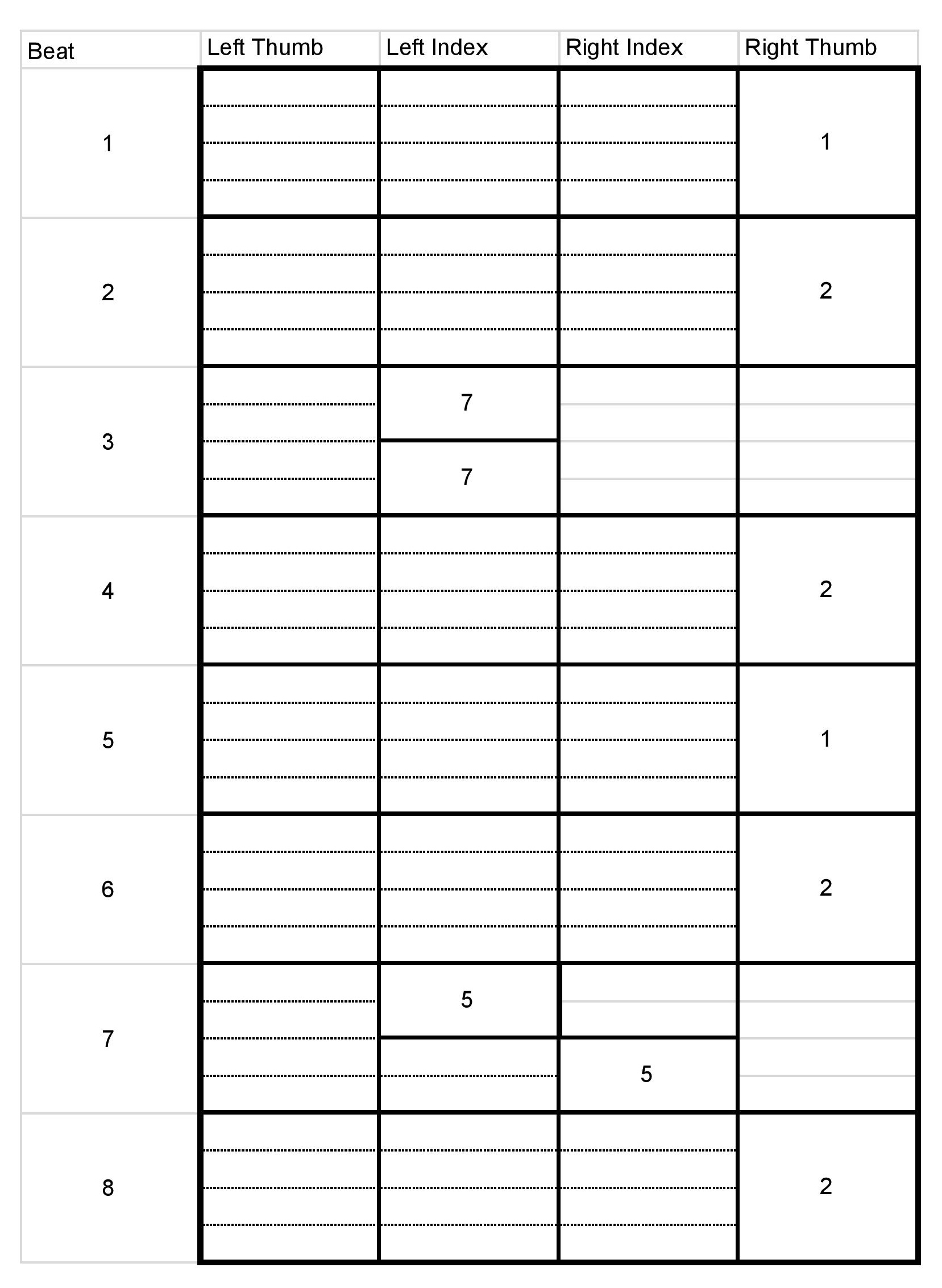 You can take this a step further by playing the octave notes slightly apart from each other. This takes a little practice, so you may need to slow the piece right down again. Each time you play the F-A sequence (1st and 2nd strings on the right hand side), we’ll add another A - the 9th string on the left hand side. Instead of playing the two A notes together, play the high A (the ninth left hand string) slightly ahead of the low A (the second right hand string.) 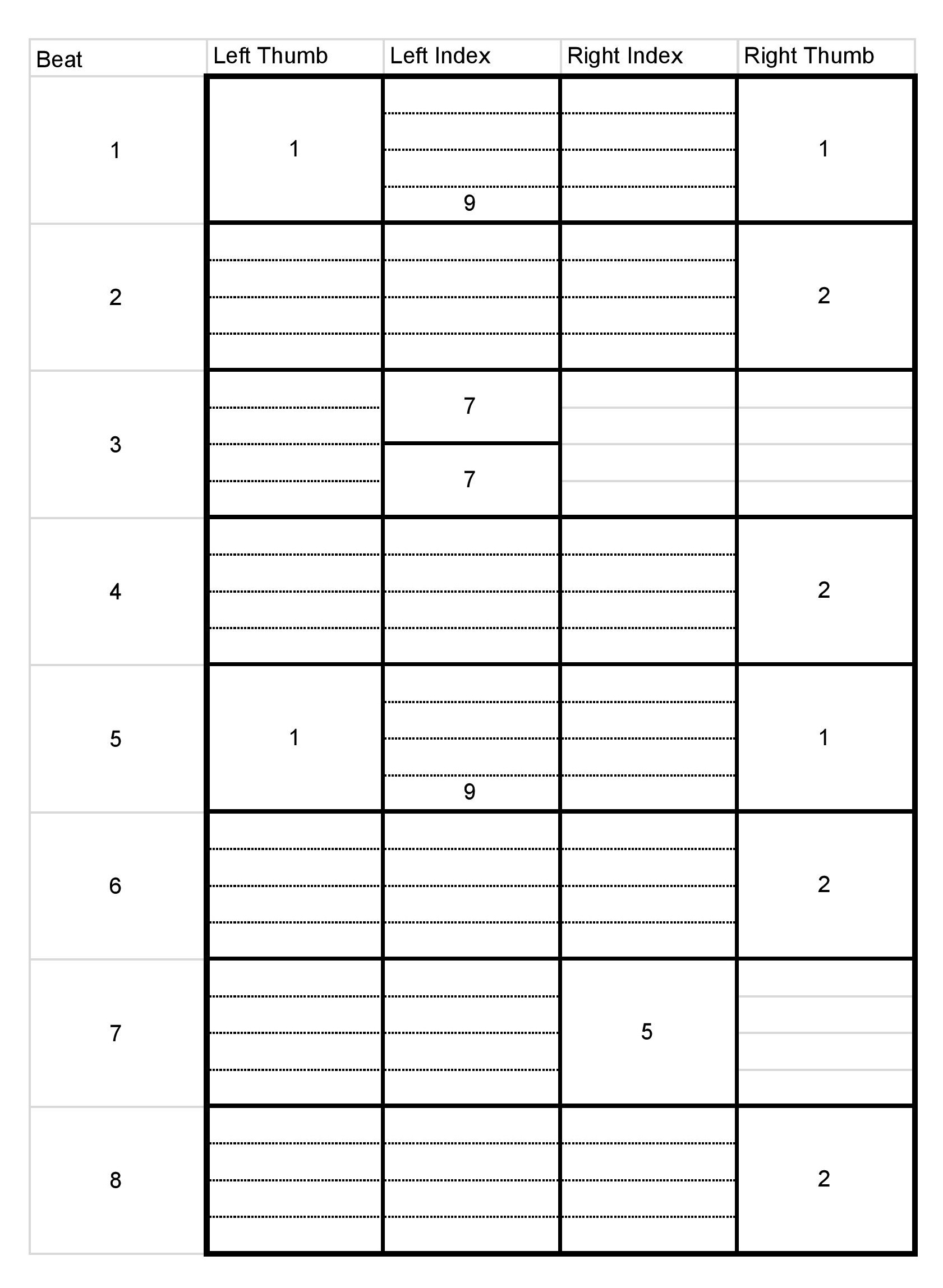 As the music is cyclical, it doesn’t matter which one of those 8 notes we start on. This means that similarly, when notating the music, we can start anywhere. This can sometimes cause a little bit of confusion for beginners.

For example, the basic 8 note sequence is treated as F-A-G-A-F-A-D-A in the video by Andrea here:


Whereas the video from zkora here:

Both are correct - they’ve simply chosen a different F as the starting point. Andrea’s video lessons on koralessons.com are a great next step. He introduces a version of Bani very similar to the one shown on this page and then introduces many variations and improvisations over the course of a number of videos.